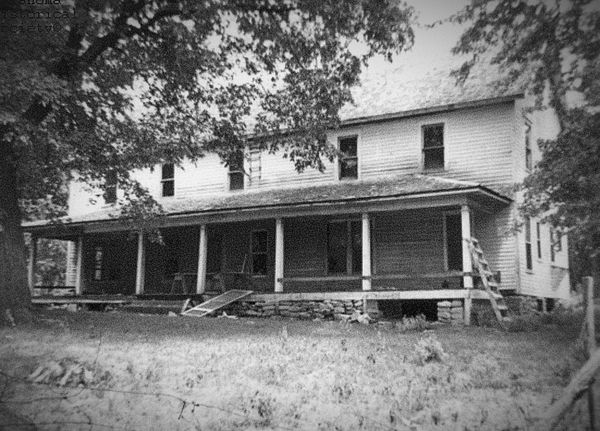 ORDER IN THE COURTS

Prior to the Trail of Tears and removal to Indian Territory, Cherokee Nation existed in our eastern homelands of what are now North Carolina, Georgia, Tennessee, and Alabama. The Cherokees operated schools, courts, a bilingual newspaper, and had a written constitution that laid out the foundations of a government and the laws the courts upheld. This era came to a halt during Indian Removal when the Cherokees, along with other southeastern tribes, were forced from their homelands to an unknown land known as Indian Territory in present-day Oklahoma. The spirit of the Cherokee people endured. Shortly after arriving in Indian Territory, they adopted a new constitution and began rebuilding. During what is often referred to as the “golden age” of Cherokee history, the tribe built the male and female seminaries – the first institutions of higher learning west of the Mississippi River. Homes were rebuilt and the government flourished. While the Civil War between the states brought about another dark chapter in Cherokee history, the nation was rebuilt again during the aftermath of the war and Reconstruction. 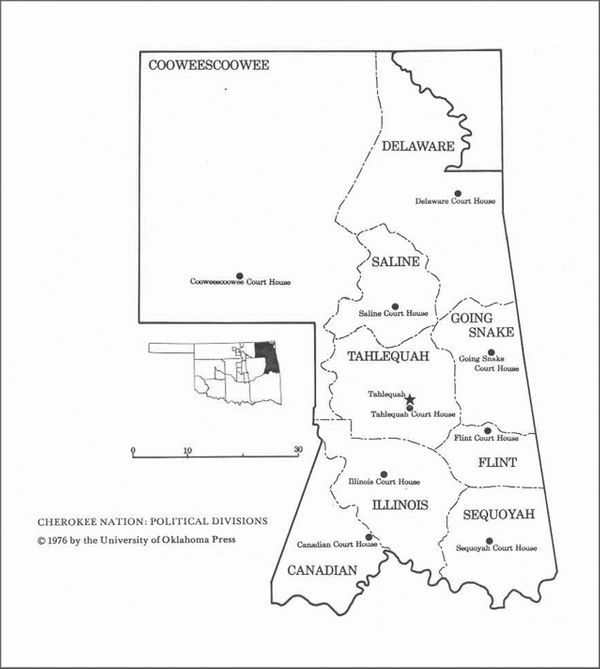 A map, published by the University of Oklahoma Press in 1976, designates the locations of each district courthouse.

In the 1880s, the Cherokee Nation constructed a new courthouse for each of its nine districts: Canadian, Cooweescoowee, Delaware, Flint, Goingsnake, Illinois, Saline, Sequoyah, and Tahlequah.

The courthouse for the Canadian District was located near Webbers Falls in what is now Muskogee County.

The Cooweescoowee District courthouse was located in present-day Claremore, Oklahoma.

The Delaware District courthouse was located in an area known as “Courthouse Hollow,” south of Grove and east of the mouth of Honey Creek, in present Delaware County, Oklahoma.

Located near the town of Mays, the Flint Courthouse was in present Adair County, Oklahoma.

Goingsnake Courthouse was near Baptist, a community located in the vicinity of present-day Westville, Oklahoma.

The Illinois Courthouse location is unclear but some documents list it as being at or near Fort Gibson, Oklahoma.

Finally, the Tahlequah District Courthouse was located in Tahlequah, where the Tahlequah Public Library (a Carnegie library) currently stands.

Of these nine original structures, only one remains standing today: the Saline Courthouse near Rose, Oklahoma.

An undated photo of the Saline District Courthouse in Rose, Oklahoma. Photo courtesy of the Oklahoma Historical Society.

In order to fund the construction of the courthouses, a law was passed on November 20, 1883 to appropriate funds to build each structure:

This law also gave specifications as to the structures themselves:

“Be it further enacted, That the court houses herein provided for shall be of the following specifications and dimensions, of wood or stone, and not to exceed in cost one thousand dollars, to-wit: Twenty-one feet in width, by thirty-three feet in length, two-stories high, with walls sixteen feet . . .”

In accordance with the above law, the judge, sheriff, and solicitor of each district would act together as a building committee. The committee was responsible for advertising, either in the Cherokee Advocate or in the Indian Chieftain, for proposals to build the structures. After thirty days, the committee could set a contract with the lowest bidder, providing the bidder could provide a bond and “sufficient security for a complete and faithful fulfillment of the contract.” All nine of the courthouses were completed by 1889.

The Curtis Act of 1898 called for the abolishment of tribal courts and shutdown of tribal governments altogether by 1906. In November 1901, the Cherokee National Council authorized the sale of the courthouses and their furnishings to the public. The sale took place in 1902, thus formally ending another period of Cherokee history. Though many tribal governments, including Cherokee Nation, resurfaced in the 1970s as a result of self-determination policies, most of the former district courthouses of Cherokee Nation were long gone. The Saline Courthouse near Rose, Oklahoma, is the last remaining district courthouse. It was listed on the National Register of Historic Places in 1976, fully restored in 2019, and reopened to the public as a museum in 2020.

Take a tour of the Saline Courthouse Museum.

PREVIOUS STORY NEXT STORY
You Might Also Like
THE COST OF FREE LAND
Learn More
CABIN IN THE WOODS
Learn More
CHEROKEE HUNTING
Learn More
View All
Search for: